Up until the mid-19th century Baptist circles, communion was largely only practiced by church members. The prerequisite for church membership, besides publicly sharing their testimony to the satisfaction of incumbent members, was to be baptized by immersion. Therefore, while they were in many ways close to their Congregationalist brothers and sisters, they differed on one significant point– that of whether or not baptism could be administered to infants. As Baptists disagreed with the Congregationalists’ mode of baptism, many – who became identified as Strict Baptists – also concluded that their church membership could not be considered valid and Christ-honouring. Therefore, in good conscience, these Strict Baptist churches believed that unless a church member had been baptized by immersion, they could not be allowed to join them in sharing the Lord’s Supper. 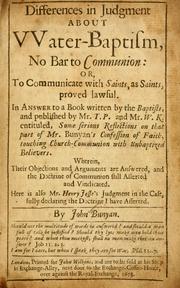 This disagreement was not new to the 19th century. It had last reared its head  in the 17th century when Bunyan published Differences in Judgment About Water Baptist- – No Bar to Communion in which he argued vehemently against a restricted communion practice. Nevertheless, the position of ‘”strict communion” was in the majority amongst Particular Baptists congregations. After Bunyan, this debate subsided for a time, until a new publication war began in the late 18th century, bought about by publications written by John Collett Ryland, Daniel Turner, and Abraham Booth.

Ryland and Turner were responsible for reopening this debate, through the publication of their “Candidus Tract” which argued, in summary, that it is a right for all Christians to participate in the privileges of the Gospel, and the Lord’s Supper is one of those granted
privileges. This right, argued the Candidus Tract, supersede differences on the modes of baptism. They further argued that there was no scriptural warrant which explicitly demands that baptism precedes participation in communion.

Abraham Booth, a strict Baptist, responded nearly six years later with his Apology for the

Baptists in which he defends the practice of strict communion. The ordinance of the Lord’s Supper, Booth argues, is to be regulated by Christ alone, through scripture – not according to the whims and fancies of men. Said Booth: “A gospel church has no more power to fix the terms of communion, or to set aside those prescribed by Jesus Christ, than to make a rule of faith, or to settle ordinances of divine worship.”

The turn of the century in 1800 saw no abatement of this vigorous debate. In 1815, another publication war was initiated between Joseph Kinghorn (a strict Baptist) and Robert Hall (an open-communionist).

Robert Hall, argued that “mixed” or open communion must be practiced, in keeping with brotherly love. Love, Hall correctly argued, is the hallmark of the Christian faith, and must be exercised towards one another generously. Indeed, the duty of love was resolute amongst Baptist congregations; John Gill’s 1644 confession opens with this duty when he lists several duties incumbent upon church members:

“Principally—love one another. This love ought to be fervent, unfeigned, and universal to the saints, weaker as well as stronger, poor as well as rich.”

Robert Hall believed that as long as the brothers and sisters were in Christ, they had a right to participate in the communion table. To do otherwise was to be unloving:

“But to refuse the communion of sincere Christians, is not a natural expression of Christian love, but do the diametrically opposite…”

Hall speaks of the hurt caused to those brothers and sisters who, after joining in worship are forced to withdraw from communion “as though they had no part or lot in the matter.”

Joseph Kinghorn, on the other hand, ardently defended the practice of restricted or “strict” communion. Strict communion, argued Kinghorn, was not an insult against the duty of love, but instead a necessity by the duty of conscience. The practice of the Lord’s Supper is such a significant sacrament, that it must be administered in such a way that “no principle is violated, no practice is altered, no innovation is introduced.” It wasn’t quite as simple as Hall had maintained it to be, Kinghorn argued. Furthermore, it was certainly agreeable that Congregationalists ought to be considered brothers and sisters with themselves, and indeed Kinghorn was willing to extend this further and contend that “there are many excellent men in every denomination of Christians, whom God will bring to his kingdom and glory.”

However, in this list of brothers and sisters, there are surely many included with whom neither Kinghorn’s NOR Hall’s congregations would share communion.

“ We also know and esteem many who are members of the Church of England, who yet plead so earnestly, and doubtless,…we go farther still and confess our obligations to excellent men in the Church of Rome. [Some here] have cultivated an occasional acquaintance with the writers of that corrupted church and will bear witness what ardour of devotion and love to God some of them manifest…with whom we can have no communion”

Therefore, Kinghorn summed his position by arguing that even Open-Communionists, such as Hall, would exercise their conscience in refusing certain Christians from the Lord’s Supper; his position was only to do the same.

However, by the end of the 19th century, this practice had largely abated. Open-communion churches were opening more frequently than closed communion churches; strict communion churches were transitioning into more “open” practices. This was caused by the influence of the rising liberalism which favoured toleration and unity at the cost of divisions caused by strict adherence to a former traditions born out by a particular reading of scripture. Indeed, by the fin de siècle, numerous Baptist churches were even practicing “open membership” – which allowed those not baptised by immersion to hold full membership in the church

2 thoughts on “What was Strict Communion? (Baptist History)”